Send us an email


Do you have any questions, ideas or suggestions for us? It’s easy to get in touch – simply use our contact form.

Foot fungus – what is it?

Foot fungus is a fungal infection that occurs between the toes, on the soles of the foot, and in rare cases also on the top of the foot, and it can sometimes become chronic. People with foot fungus are also at greater risk of toenail infection: If the fungus spreads to a nail, this is referred to as nail fungus. According to estimates, one in three people in Germany suffer from foot fungus.

People are infected either as a result of direct contact or indirectly via infected objects or flooring. One way of avoiding infection is to wash shared towels at 60 °C or higher. Carpets, tiles and shower trays can also harbour the pathogens while they wait for their next home, though. Like all other fungi, filamentous fungi love a damp, warm environment – which is why they thrive in saunas and public swimming baths.

Certain factors also increase the likelihood of infection: Severe sweating in closed-toed shoes creates ideal conditions for the fungi. Skin that has already been damaged – swollen by moisture or cracked due to dryness – leaves the door wide open to pathogens. And finally, a weakened immune system – such as that of diabetics – has little with which to fight infection. Similar considerations apply to other metabolic disorders, impaired blood flow, and occasionally even antibiotic therapies.

The treatment of foot fungus depends on the extent of the fungal infection. In the initial stages, external applications are usually sufficient. If infection progresses further, oral therapy should also be used to fight the fungus.

Dry, infected skin needs skin care products that are rapidly absorbed by the skin and do not leave an unpleasant, greasy film on the skin that can cause the skin to swell even more. Nevertheless, they should still provide the skin with sufficient lipids and moisture in order to restore the skin’s natural protective function. An intact skin barrier is the best protection against reinfection. 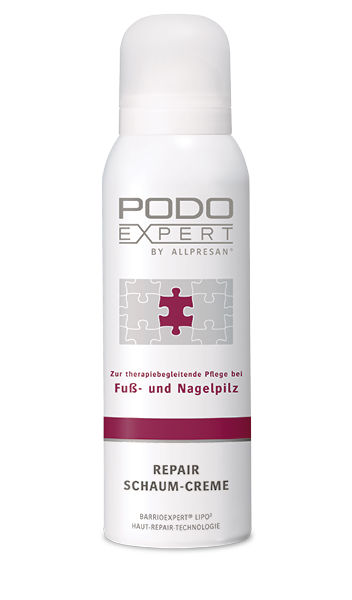 Repair Foam Cream
In conjunction with therapy for foot fungus